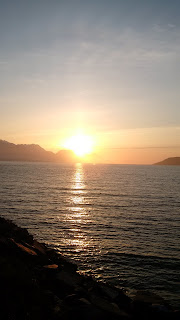 I had the great pleasure of checking off a "bucket list" item recently.  Tribal Vision performed at the Riddu Riddu Festival in Northern Norway and we got to see the midnight sun.  It is definitely a beautiful sight.  It is a strange sensation being somewhere so far from home that the sky looks so different. 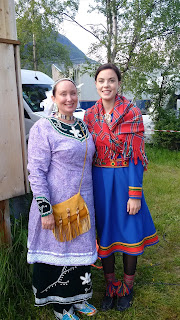 This is Karoline Trollvik.  She is the Festival CEO and she and her team, family and volunteers did an amazing job.  Everything ran on time and the everyone made us feel welcome and at home. 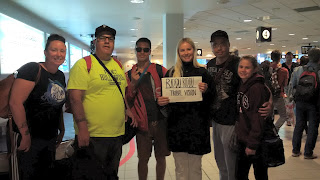 Lenna met us at the airport and took great care of us making sure we were fed and getting to the festival.  Once there she worked in the cafe so we saw her often. 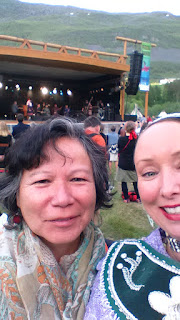 Shelley Niro was part of the Six Nations delegation at the Festival.  This is a multidisciplinary arts festival so in the library of the Northern People's Centre they had an exhibition of her artwork and Her film "Kissed by Lightning" was also shown.

The Six Nations Women's Singers put on a wonderful performance on the MainStage.  It was really cool to see people who had never heard this music before swaying and dancing. 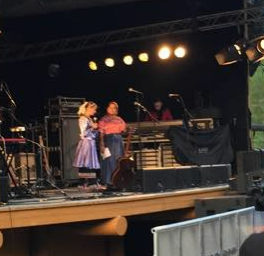 Ava served as a Host on the MainStage on Friday evening introducing the headlining acts.  She did such a great job. 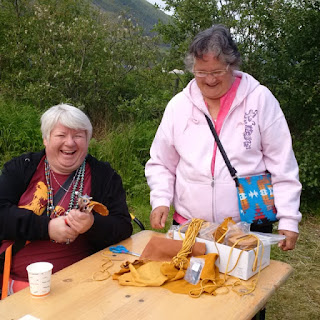 Saturday was "Six Nations of the Grand River Day".  The Women's singers put together a really cool program of activities with each Singer presenting a craft or game for the people to try.  At the end we wrapped it up with some social dancing. 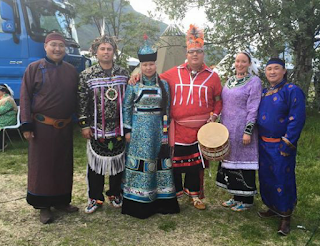 All of the musical acts were top notch but my favourite was Chirgilchin.  This group killed it on stage.  When they collaborated with Arvvas, I couldn't sit still.  I just had to dance. 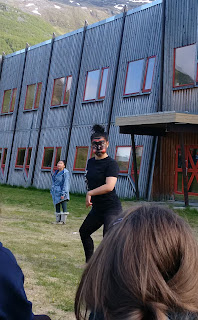 Jacob, Kristen and Ava participated in the Nuorat Youth exchange program with Indigenous youth from all over the world.  At the end of the program some of the youth shared dances from their traditions.  This is a Mask dance from Greenland. 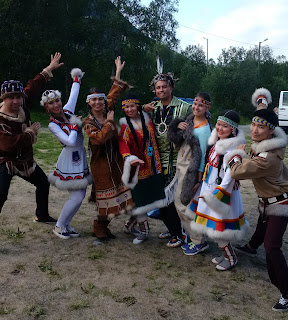 This group representing different regions of Russia were so polished it was hard to believe they are all under 25. 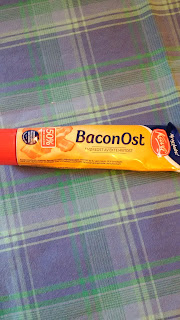 The town that the festival is held in has no hotels so all of the artists are housed in local homes.  The festival organizers send the artists with groceries to cook breakfast.  Yes, you are seeing that right.  Squeeze Bacon.  Thank you Norway.

There was so much more happening at this festival that I didn't get to a chance to mention.  A Children's festival, Vendors, traditional northern homes of different types of peoples opened up for visitors to see and experience, wood carving, Cheri Maracle's one woman show "Paddle Song", great main stage acts like Nanook and Katchafire.  Thank you so much for having us Riddu Riddu we loved every minute.