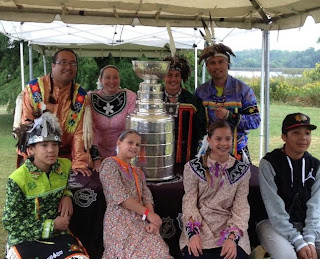 What a great weekend we had in the "Windy City".  The powwow committee brought us out to do some smoke dance exhibitions during the powwow this year and the hospitality was amazing.  This was the first time that any of us had every been to this powwow so we were very excited to be asked to do this.

We met some really cool people and were thankful that Heather and Soleil joined us during our presentations.  The Stanley Cup made an appearance on Sunday and we just barely made it in time to get a picture before it had to be whisked off.  Ava is a huge fan so she was pretty ecstatic to be there.

It rained all day Sunday and the powwow had no rain site. We were pretty happy that the head judge Adrian Cline made the decision to award the prizes based on Saturday's contest only and have Sunday as a social instead of a contest powwow.  He was prepared and had 7 judges on Saturday.

I will be posting videos from the powwow on our YouTube channel later this evening, surf on over and check them out to see the adult categories contest from Saturday night.

Email ThisBlogThis!Share to TwitterShare to FacebookShare to Pinterest
Labels: powwows, Shows and workshops