Derek and I were fortunate enough to be asked to join a group of performers for "Indian Days" a four day festival celebrating Native American Culture at El Dorado a Western themed park in Templin, Germany.  We had no idea what to expect when we left home but were ready for an adventure.  We met some really great people who made our time go by in a whirl wind. 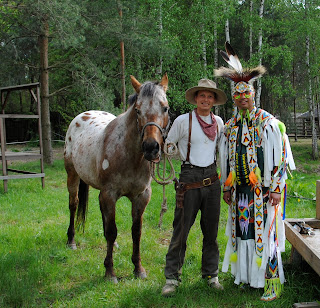 This is Marcus, he is the head Stuntman at the park.  They do at least 3 shows a day and they are really action packed.  What I liked is that in one of the Shows he plays a Native and of course the Native saves the day and is the Hero.  My kind of show.  lol.  We got to meet and get to know most of the stunt cast and they have such interesting lives.  Marcus played the Witch in Hansel and Gretel just recently.  He was also a World Champion in Parkour in 2008.  Mighty impressive. 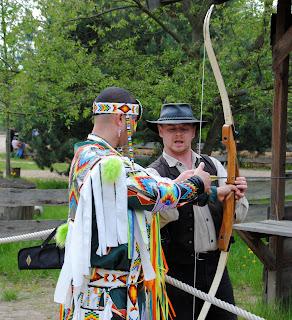 Derek and I had a room in the Fort which is modelled after a 1800's military fort/barracks.  We passed the archery range going to and from the Indian dance show arena and Patrick would let Derek shoot for free every time.

The park has the kind of goofy mascot called Yoki Ahorn.  We made him dance in our show every time and the kids loved it.  By the last days I had him compete against me in a smoke dance.  This backfired as the dude in the suit can actually dance and he had some moves.  lol. 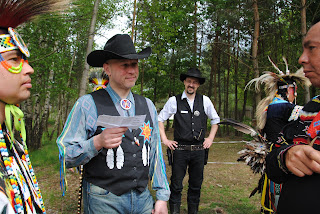 As I had said we met some really cool people and one of them is Ingo.  He served as the MC for all the shows as he understands powwow culture and could explain things in a way that we were all comfortable with.  The first day the audiences didn't seem all that receptive to Derek and I and then it dawned on us that we are in an old west themed park and our outfits are VERY 2013.  Ingo made sure to explain this to the people and then they warmed up to us. 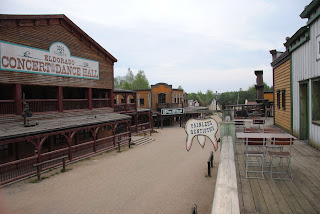 Main Street - El Dorado.  Such a cool place.  All the buildings are open to the public and are done up really nice.  I made a video of our experience on my Z10 and have uploaded it below.

Email ThisBlogThis!Share to TwitterShare to FacebookShare to Pinterest
Labels: Shows and workshops, video