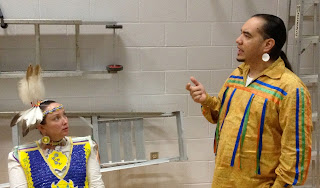 Last week we took part in the First annual First People's Festival at the Region of Waterloo Museum.  We did a family day and three days of school tours.  I thought it was a great festival and was happy to see quite a few people that we had seen at the Plowing Match the week before.  I was pretty glad that we had a completely different program at each festival because that could have been real boring for people to see the same thing twice.

Derek, Adrian and I all ran our own workshops instead of working together at this festival.  At first I thought it would be awkward but I ended up really enjoying myself.  My workshop area was in a tent down in the pioneer village.  I think we all had a good time and I hope we are involved again next year.  There were so many cool things and workshops to take I don't know how the groups decided which to take.

Today we were Toronto at Lakeshore CI.  We did a workshop with a group of Lakeshore students and their German exchange students.  I was pleasantly surprised at the participation by all being that it was first thing in the morning after a long weekend.

We hope you had a relaxing weekend with your friends and family.  We spent it surrounded by family and were incredibly thankful.