The start of our powwow summer started really at Mashpee powwow in Cape Cod, Massachusetts.  Derek and I decided at the last moment to go and hopped in the van and drove the 10 or so hours it took to get there.  What really drew me to this powwow was that the Community Members shared one of the sacred medicine games with outsiders during the powwow weekend.  I really wanted to see it.  There is only one known photo of the game in the Tribal Office and no video in existence so you have to go to witness it.  It is called Fireball and it's just like it sounds.  2 teams and each is trying to throw a ball of fire through flaming goal posts to score.  Highest score wins, and the game ends when the ball goes out.  Playing is a form of sacrifice.  The game is really intense and I felt honoured to be able to witness it. 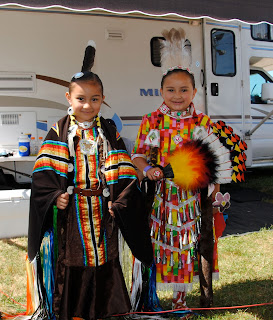 Our girls have grown out of some of their dresses so I took them to the powwow to try and sell them.  I was able to sell two of them to these gorgeous sisters.  It was just awesome that the dresses matched the beadwork that they already had.

This is the powwow grounds.  This shot does not show the steep angle that we had to dance up.  It does show the fire that we were to dance around all weekend.  I personally am not a fan of having the fire in the middle of the dance area for 2 reasons.  1. As a dancer (and non-smoker) you really don't want to breath in smoke when you are dancing your hardest.  2.  The fire is meant to be a place to offer your tobacco and also a place to pray which really isn't something I want to have to cut through a contest dance to have to do. 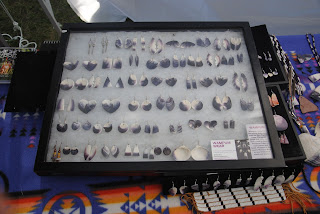 The vendors at this powwow had some really beautiful things for sale.  I loved this wampum jewelry. I so want the heart earrings. 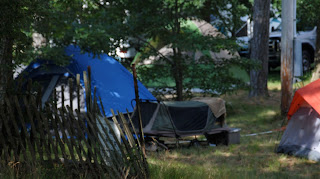 This was the start to our camping adventures for the summer and as I looked around the campgrounds I noticed this sleeping pod that I thought was awesome.  Not sure I would be brave enough to sleep in it but wow what a space saver when packed up in the vehicle.