So during our time at Enoch powwow it rained quite a bit.  Because of this we didn't take photos or video during the powwow itself.  I didn't want to get the electronics wet transporting them from the campsite to the powwow arbour.  They have a beautiful permanent arbour that allows them to have their powwows in any weather.  What I really liked was that the committee put up plastic sheeting so that people sitting in the tops of the bleachers wouldn't get wet in the wind.

When we go to these powwows we rely on the host community to have showers available as our trailer does not hold enough water for all 6 of us for four days.  Enoch had showers but the charged a crazy amount of money to use them which had us going out to a local campground to use their showers. 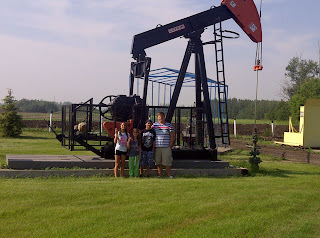 The campground we went to had an oil museum.  The powwow itself was great.  I had Northern Cree and Cree Confederation sing my songs for my first round of contest.  I must say, that was the best EVER!  Ok, so it rained and rained and rained some more so that when the powwow finally wrapped up late sunday night the dirt driveways and the dirt road out were all washed out.  We had already planned on staying another night so we were ok...or so we thought. 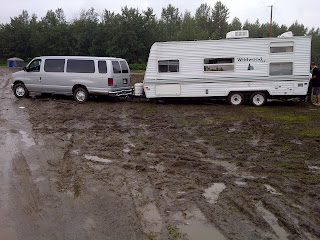 We got ourselves stuck in the mud when we tried to leave on Monday morning.  When I tried to go and find some boards to put under the tires the mud kept sucking my shoes right off my feet or with each step I would throw mud up my back right into my hair.  It was pretty gross.  As I was looking around I noticed that there were quite a few people stuck.  We actually weren't stuck long when along came a local who pulled us out, trailer and all.  We will be eternally grateful to him as we wouldn't take anything but our thanks.  The kids were pretty sure he was Chuck Norris. 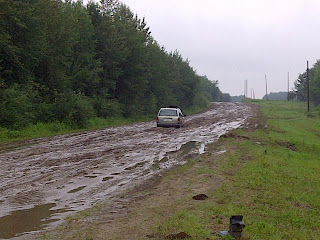 Our joy was short lived once we got to the road back to the highway.  This minivan was stuck right in the middle of the road and had been there quite a while.  Yes, there were people inside.  As we contemplated what to do another man in a big pick up truck pulled up and pulled these people out.  He told us to follow him to the highway so he could help us if we got stuck again.  It was a scary 10 minute drive but were we ever happy to get back on pavement once again.  The locals in Enoch are so nice and we might still be there if it wasn't for those two men. 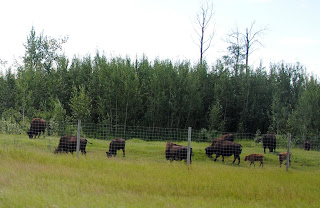 We had a few days before the next powwow so we decided to head out to Jasper to see the Rockies.  Wow that is a beautiful place.  We saw a lot of wildlife on this trip, starting with these Buffalo. 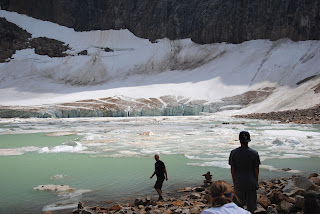 This is Angel glacier.  What I will remember most about this is the gigantic spider Jacob found.  *shiver* 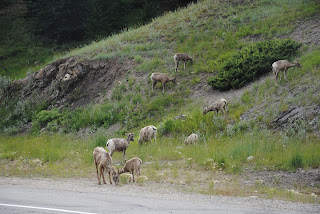 The animals in this park are pretty used to humans I take it because they completely ignored us and went about their business. 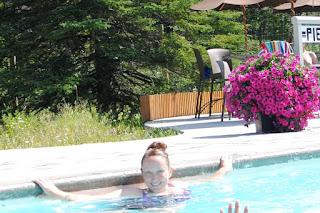 We just had to hit up the hotsprings even though it is summer time.  We went early in the day before it got to warm to go in. 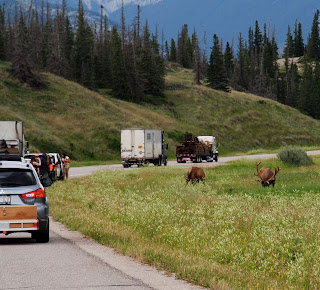 These fellas here caused a bit of a traffic jam but again they couldn't care less about us. 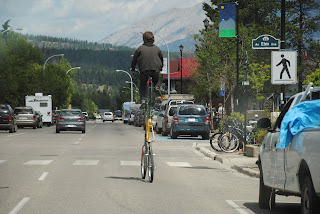 I'm not sure if he qualifies as wildlife or not but the bike was really interesting. 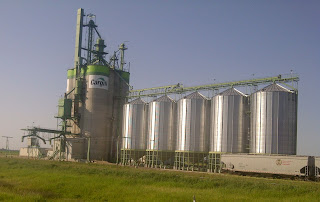 You know how different people find different things really interesting.  Well, Derek was fascinated by the grain elevators that we saw everywhere. 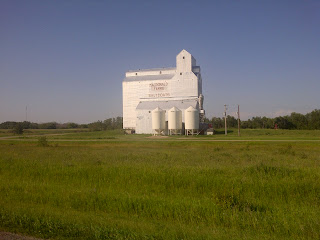 As we'd pass one he'd say "oh, that ones cool, take a picture".  So I started to take notice of them and he's right they are pretty cool. 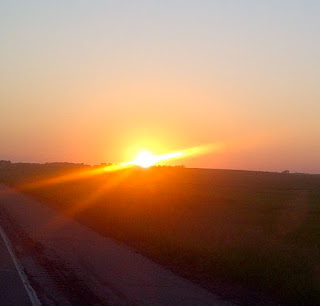 This picture signifies my very favourite moment of our whole trip.  Because we were on the prairies you could see for miles and so we were able to watch this sun set for quite a while as we drove.  We took note that this is probably the only sunset we may see as a whole family together because the kids are growing up.  Everyone got quiet and keep their eyes glued to it until it finally passed below the horizon. Each one of us trying to preserve this special moment in our minds forever.  And then the teasing and games began again....