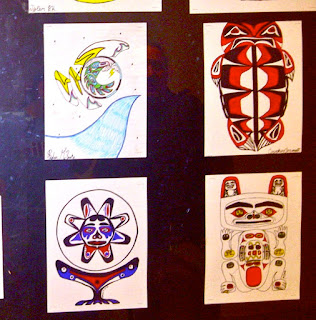 Yesterday we were in 2 different High Schools in the Hastings Prince Edward School Board.  We visited  Central Hastings and Centennial SS.  The amazing art above is from Centennial Native Studies Students.  We never know what is going to happen or how we will be received when we go into schools which is great and a bit scary too.  Well we were blown away by the students in both schools.  We did sing/dance workshops at both places and had such a great time.  I often forget that we are hired to be there to entertain and educate because we end up having such a good time ourselves.

Today we were at Assumption College School in Brantford and Hill Park SS in Hamilton.  There were quite a few students at Assumption that we know as they are bused in from our reserve.  It was great getting to see them and visit.  Hill Park was a blast.  I don't think they realized when we showed up that we planned to have them sing and dance.  Well they got right involved and had a good time with us.  I hope you have as much fun each day as I do.  That's what I call success.