Friday was an interesting challenge for us.  We had to do three hour long performances in 3 different towns with only an hour in between each show.  We knew we could do it however we had not ever attempted it before.  We were really looking forward to this.
I love that there is an actual parking spot for the horse and buggy.  The horse can stand on dirt instead of concrete and there is a place to tie him up.  Now if there was a water trough that would be super cool.  Communities that include everyone are the way to go. 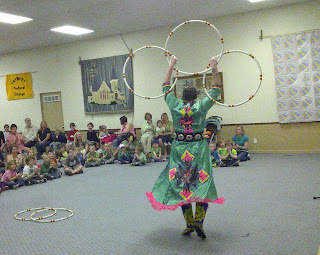 This strange warm weather streak we have been having was a blessing on this day.  There have been many a snow storm at this time in March and we were very lucky not to have to deal with that during our marathon day.
At the performance in Tillsonburg there was a group of kids that had made the rattles we have here on our site and they also made shawls that were really cute. 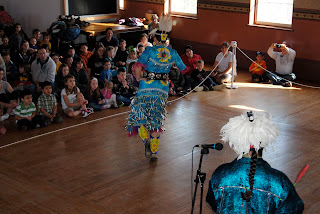 After the first performance in Woodstock, Adrian spoke with a reporter and we were surprised and pleased to see that by the time we were finished for the day we were in the E-edition of the paper.  You can check it out here if your interested.