I have been a bit lax in my posting lately.  We have been doing some really interesting performances, meeting some really cool people and I have been falling behind in my online posts.  Last week we were at Allan Drive Middle school and right in the doorway there is this really great art piece.  If you happen to check out the page on Bill Powless who happens to be my father you will see why I am so impressed by student art.  I am not able to draw stick people in proper proportion.  sigh. 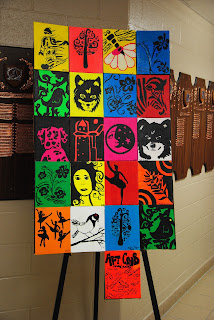 The Tim Horton's Camp at Onondaga Farms in St George ON is a really cool place.  We get invited to  participate in events being held there a couple of times a year.  Last week as we were pulling into the driveway we noticed this snapping turtle crossing from the pond on one side of the drive to the pond on the other.  He was almost across so we left him alone to do his thing but we hung out to warn other peeps so they wouldn't hit him. 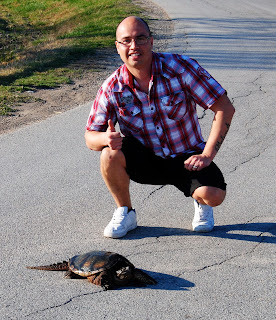 On Monday we were at the BHNDSB and we love when we get a chance to spend some time with Educators.  They are generally a pretty outgoing bunch and willing to try new things.  We were also at the DPCDSB recently working with Secondary students.  We had a really awesome discussion with them.  I think I like getting the opportunity to speak with students almost as much as I like dancing. 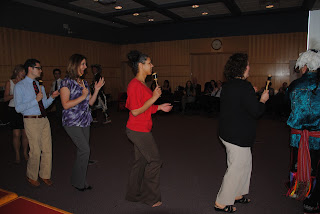 We also performed at the Rochester Knighthawks game and I look forward to our next chance to get to a game.  The Knighthawks lost and I really missed hearing the deafening fog horn that goes off whenever they score.  I am sooooo making myself some silver pompoms.