Tribal Vision has been very fortunate in sharing our culture in schools and theaters'.  In April of 2011, Adrian sang at the Gathering of Nations Powwow for the Smoke Dance Special.  This special contest was to honour the outgoing Miss Indian World, Dakota Brant. Adrian is not Haudenosaunee but he has learned the songs from the very best singers in Haudenosaunee territory.  Adrian is married to a Mohawk, Jennifer, so he took it upon himself to learn the songs and customs.  Adrian is a very accomplished Powwow Lead singer and has sung with many of the top drums groups such as Tha Tribe, Northern Cree, Whitefish Jr's, and Eagle Flight to name a few.

Haudenosaunee people are very competitive by nature and smoke dance was made to showcase the foot speed and style of the dancer.   This was another way to compete against one another. The competition is based on style & dancing on beat, getting the pauses and stops during the song.  Smoke Dance songs were made from mostly social dance songs, just sped up very fast and very short.  There is also an interesting urban legend that says that elders would get the younger generations to dance very fast to help clear the smoke out of the longhouses.  But for social dances in todays Longhouse's smoke dance is not done. Smoke dance is strictly for competition and for dance shows.  If you went to a Haudenosaunee social today you would not do smoke dance.

Haudenosaunee people dance for a variety of reasons.  Celebrations of all kinds, Ceremonies of all kinds giving thanks to the Creator for a variety of reasons.  Certain dances are for socializing and sharing with all people whether Haudenosaunee or not and smoke dance is one of these.  Other dances are ceremonial or medicinal.  Sacred Society dances are private and to participate you must be a member of the society. 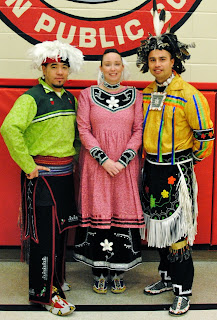