Tribal Vision Dance has on more than one occasion taken bookings at the last min or helped fill a roster spot in a program.  We are a professional family dance group which makes us more flexible. I know that things come up unexpectedly and we always do our best to help.

On a different note we are presently looking for a Booking Agent specializing in school bookings, we are currently looking for the right fit for us. If you have any suggestions please email us.

Here is a nice flute song for your listening enjoyment Flute song
No comments: 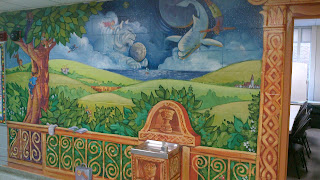 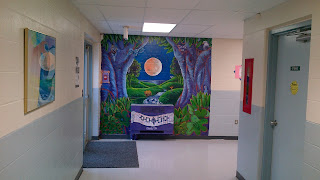 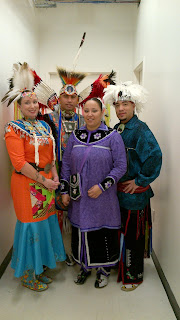 On tour in Algoma Limestone Catholic District School Board 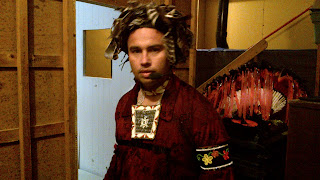 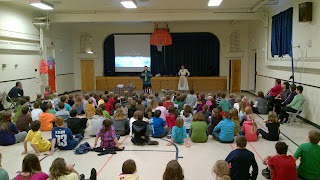 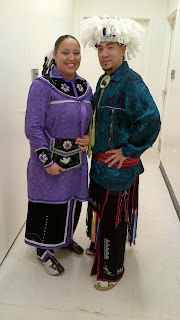 Tonight's show at Laurier Brantford went really well.  The Student's Association did a great job of making us feel welcome.  We really appreciated how well organized Nicole was. We would love to work with these peeps again.  We also just loved that we could use the sound system in the venue so our set up and tear down was easy peasy. 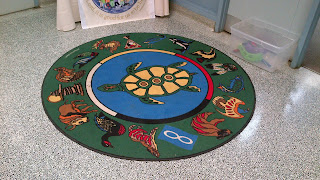 Check out this awesome rug.  This was in Holy Name of Mary school in Marysville, Ontario.  They had the most beautiful murals as well. 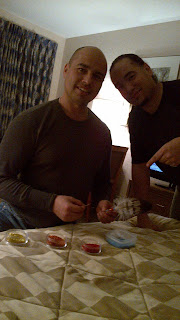 We have been so blessed to have spent so much time out in the East so the guys thought we should show our appreciation with a gift.  It looked beautiful and it was a special moment for us all.
No comments:

UNGS: A chat about Attawapiskat

UNGS: A chat about Attawapiskat
This is a great piece about something that has been on my mind constantly lately. Please take a moment to read it.
No comments:

Back in Eastern Ontario

We had a really early start to our day, being on the road by 4 a.m.  We thought things were going along great until we were loading in to the first school and locked the keys in the van.  Ack!  I was so grateful that someone was able go help us out and the show happened right on time. 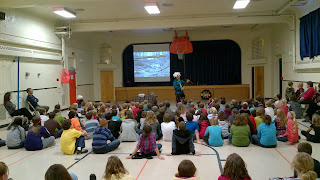 We then headed to Tweed Ontario for our second show.  We stopped in at Vito's for lunch and I for one recommend that place.  Tasty,tasty.  We will be at Queens University tomorrow, if your there say hi! 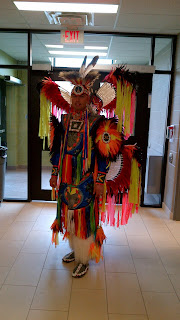 OESC cards are in!

I'm very pleased that we have received our Ontario Education Service Corp ID cards.  We are always working to ensure that we meet all guidelines for our performances and workshops in schools.

Happy Native American Heritage Month to all our friends in the US.

Yesterday we were all over the place with two performances.  First we were in London ON for a multimedia show for wee tiny audience members.  That was our first time with an audience of totally pre-school aged children.  I was so happy that they were engaged and enjoying themselves.  Wow, it really takes some serious thinking in how you make yourself understood.

We then had to go to Toronto to help out the local youth dance group "Lost Dancers" at Education Day for the Canab Festival.  It was a whirlwind day and I am looking forward to a nice relaxing weekend.

Have a safe and fun weekend!
No comments: 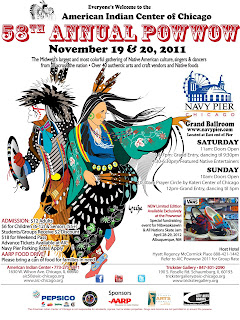 Just found this today.  If you are in the Chicago area this weekend, go check it out.  I've never been to this powwow but I have heard good things about it.  Maybe next year.... 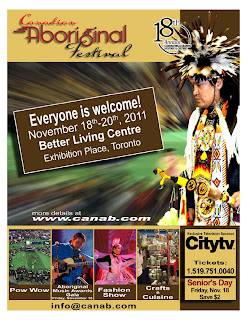 I have also found this poster as well.  If you are in the Toronto area you might want to go and check this one out.
No comments:

We returned to CH Norton PS today.  I am just so impressed with the students at that school.  They are so outgoing and willing to try new things.  They work together really well too.  I think that speaks highly of the staff at that school and I believe those kids are going to do well in the future.  They just made me so happy being around them.  We are looking forward to returning to Eastern Ontario next week.  We do still have availability in December if you are interested in having us in your school give us a call or email.
No comments:

Saying it with Humour - The Art of Bill Powless

The "Saying it with Humour" exhibit is currently showing at the Woodland Cultural Centre in Brantford Ontario.  One of the most interesting stereotypes about Native people is that of the "Stoic Indian".  Well I wonder where that comes from because laughter has always been a big part of life.  That is one common thing that I found no matter what community you visit anywhere on Turtle Island, you listen for the big loud belly laughs and you will find the Natives. 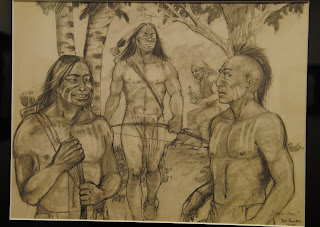 This piece is called "April's Fool".  This art show features original works as well as a lot of the cartoons Bill did for the local paper as well.  The opening featured Micheala Washburn debuting a character she has been working on for her comedy show.  If you ever get a chance to check her out I hightly recommend it.
If you are in the Brantford area I hope you stop by the Woodland Cultural Centre to check out the show. I believe it runs until Christmas.
No comments:

Derek and I attended the Manito Ahbee Festival in Winnipeg over the weekend.  Neither of us had ever been so we were pretty excited to be there.  For us the first event was the Aboriginal People's Choice Music Awards which are broadcast live on APTN.  We were so confused trying to get into the MTS Centre that we wound up on the red carpet right when Derek Miller (who won 2 awards) was going by. We of course got a picture of the 2 Derek's (it's on facebook).

I took this picture as we were getting to our seats.  The place was filling up and I must say the stage looked amazing.  I really enjoyed the awards show.  The amount of support that the people showed to the musicians was just so inspiring.

I loved how well run this powwow was.  They kept things moving along really well and keep pretty close to the schedule.  At one point we were 10 minutes ahead.  Yes, you did read that right. 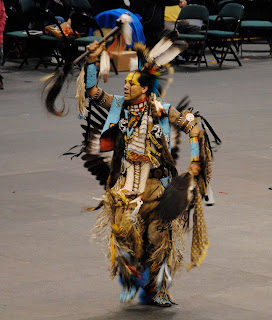 This is Will Hedgepeth, owner of Red Eye Supply.  He won the Men's traditional special.  As you can see from the picture above there were a lot of men he was competing with.  I couldn't even get them all in a shot.  It was pretty exciting having someone from our area win the special.  Congratulations Will! 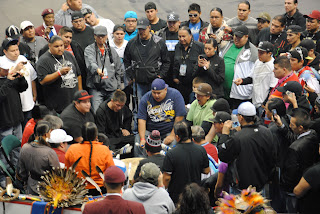 The Young Bear Singers were set up right below our seats.  They were recording a CD this weekend.  They were sounding gooood.  You can always tell what drum groups are sounding good by the number of people crowded around them trying to get a personal recording.

I want to say a special congratulations to Derek as he took 4th in the Sr Men's Fancy category.

I would give the Manito Ahbee festival a big thumbs up.  I especially enjoyed the powwow and would go back in a heartbeat.  I had one tiny negative.  This was the only powwow I have ever been to that I couldn't get any Native food.  What's up with that?
No comments: 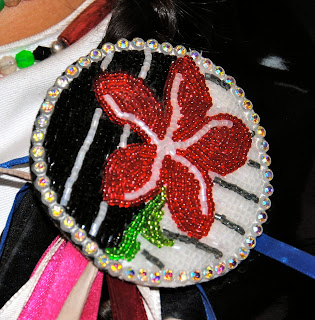 I hope everyone had a safe and enjoyable Halloween.  I know we did.  We finished up our engagement at The Museum  in Kitchener today.  If you have never been, you really should go and check it out.  That place is really great.  Now is the time of year that we go into high gear with beadworking and outfit making.  That makes now a great time to book us for your school or event!

Check out our new pages for the multimedia show and workshops.  Leave us a comment and let us know what you think.
No comments: