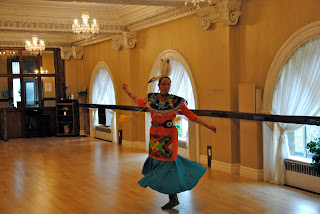 Naomi warming up before our 4 sing / dance workshops as apart of the Children's Filmfest put on by THEMUSEUM downtown Kitchener.  We were fortunate to be able to use space at a dance studio right around the corner!!! 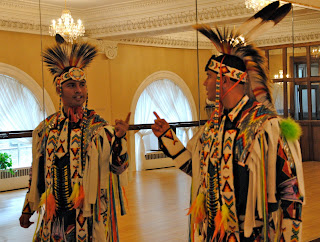 Derek just being silly " Hey you look familiar" During the workshop he teaches students how to dance, why we dance and where the dance comes from.  Today he is demonstrating Grass Dance. 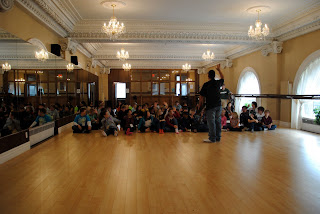 Adrian doing his thing! Getting students charged up and excited about singing! Students learn 5 main points of interest about singing in this shortened version of our workshop. We only had a total of about 40 mins to do both sing/dance. But we are very versatile.  The students all sang very well and had a great time doing it! 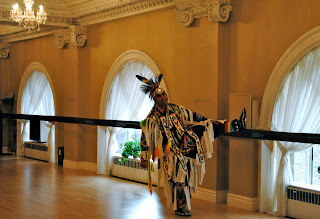 Derek thought he would stretch after he was done, wow those other dancers are flexible lol  Great dance studio.
No comments:

Kelsey’s Story
Found this today on Facebook. She inspires me everyday!
No comments:

It's time for the imageNATIVE film festival and it seems like just yesterday that we were there last.  Adrian was honoured to be asked to take over the MCing of the social part of the day.  He really enjoys doing that sort of thing. 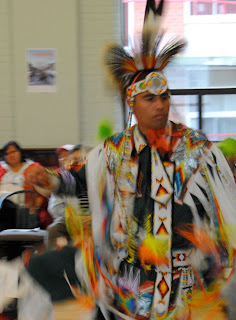 We have been working on Derek's Grass dance outfit and I think it looks pretty good.  I don't know if flowy is a word or not but that's how I would describe it. 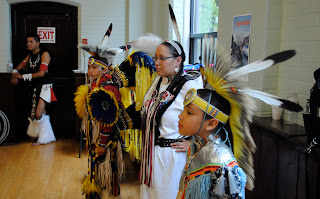 The day was set up like a social where dancers could come and participate in intertribal dances with different groups doing short demonstrations throughout the day.  Pictured above is Eric Pipestem who did an awesome hoop dance.  I took other pictures of his performance but as you can see from these I was a bit pictorially challenged and they didn't turn out. 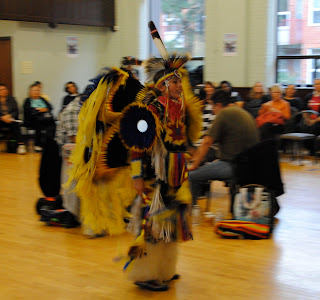 During the intertribal social portion of the day Jacob was asked to a fancy feather dance exhibition.  Eagle Flight Singers were there to sing so Jake got a rockin' song. Just before Jen and Kristen danced Kristen leans over to me and says "it's on".  I giggled to myself and thought "competitive much?"  lol. 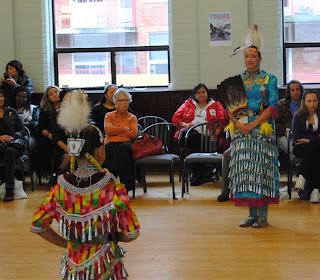 Derek and I hope to get out to some more of the festival this year.  If we see you out come and say hi!
2 comments:

Family thankful for support - Fort Erie Times - Ontario, CA
Here's a link to an article about our Stevensville visit on Wednesday.
No comments: 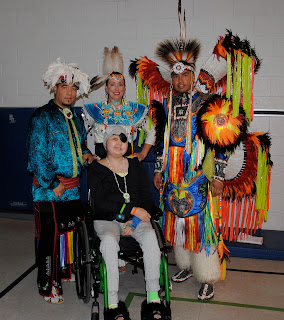 We were at Stevensville PS on Wednesday morning.  Our cousin Kelsey goes to this school and she has been battling an illness for a year now.  We thought we would come and share the celebration of her being back at school by doing a presentation for the students.  I had such a good time.  A lot of family came out from the Reserve to see the show and that was so great.  I have the most supportive family.  I wanted to mention that Kelsey is collecting full size chocolate bars for the Halloween Parade at McMaster Hospital this year. 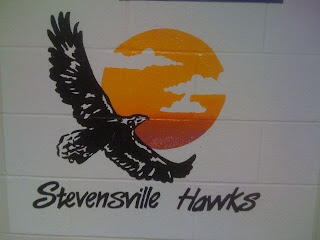 We were also at Crawford Lake that day to do a craft workshop and some storytelling with the Native studies students in Halton.  A bonus for me was that Janace Henry was there with Indian Tacos and donuts for dinner.  Yesssss. 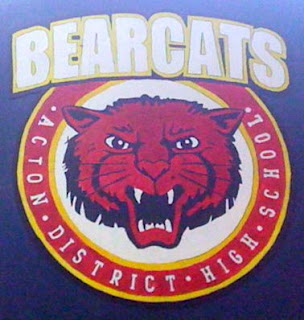 On Thursday we were at Acton HS for a workshop and were pleasantly surprised to find that we had met a lot of students the day before at Crawford Lake.  The Acton students were a blast to work with and we would love to go back there again.  When we saw the school logo I couldn't get that David Wilcox song out of my head all day.  Yup the one you're singing now.
Have a great weekend and see you all next week.
No comments: 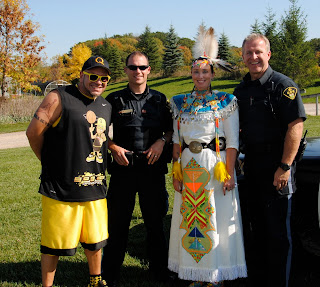 Last week was the Dreamwalkers Gathering which is put on by NPAAMB.  We took the students through some basics about The Drum as well as had them dancing with us.  I truly wish they had this sort of thing when I was in High School.  It was awesome to see so many Native Students from all over Southern Ontario over the course of the three days.

During one of workshops we noticed that the students were all looking behind us and when we turned around there was Q-Mack the Keynote speaker had a table balanced on his chin.  I'm talking about a 6' table at that!  I was glad I was able to get him to stand still long enough for this picture. 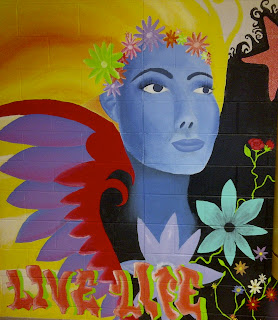 On Thursday we were at Monsignor Doyle in Cambridge.  I loved all the artwork on the walls of the school.  If I went here I would have been in a chipper mood all the time.  It's hard not to be with all this colour and positive messages surrounding you. 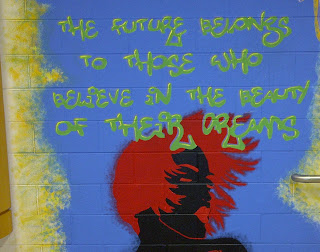 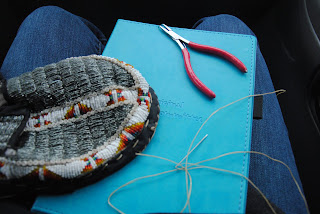 So we go through a lot of repairs on our outfits. My least favourite thing in the world is replacing the soles on moccasins but that is exactly what I found myself doing on our way to our first performance today. 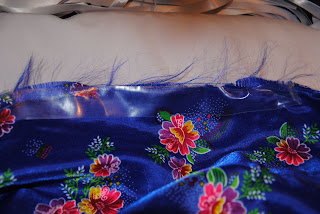 I was getting ready for our second show and discovered a huge rip in my hoop dance dress. I didn't discover it until right before we were about to start so all I could do was put clear hockey tape on it. It held, sort of...
I guess it's time for a new dress. 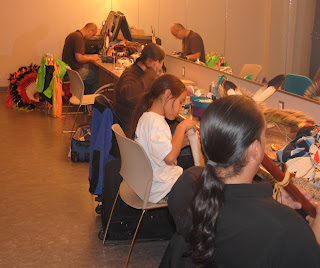 Our first performance was at the newly opened Milton Centre for the Performing Arts. The changerooms were fabulous, with enough space for us to really sprawl and get ready. We hate to rush so we turn up early to events so we can take our time getting ready. It was a good thing today because we actually got to start early. 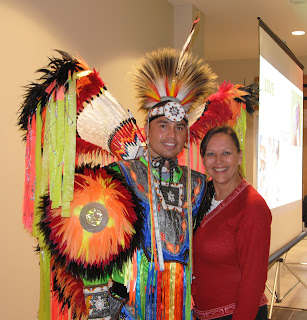 This is Sherry, she is one busy lady. It is always a pleasure to run into her at events around Halton. 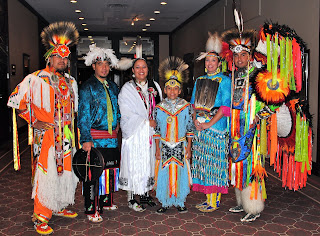 We finished off our evening at the Sheraton Centre in Hamilton for the Ontario Tourism Summit. I had the very best time here as the people were all so nice. We are off to the Dreamwalkers Gathering for the next few days. I hope you have a great week.
No comments: 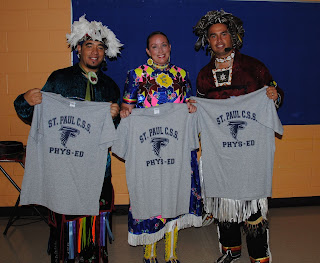 We spent a really fun week in Eastern Ontario. We did shows and workshops in High Schools which we enjoy because the questions and discussions we have with the students is interesting. We think we've heard every question there is but sometimes we will get asked something that makes us think and I for one, like that.
Our last performance was at St Paul's and they gave us each a T-shirt. The guys were sporting them pretty much immediately. I called this post part 1 because we will be going back in February for another week. I am not looking forward to winter but I am looking forward to our return to the East.
No comments: