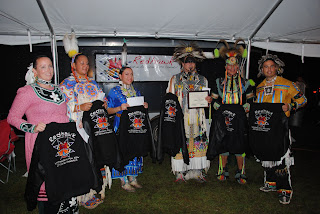 Well I guess the picture kills the surprise. Derek and I won the North Eastern Powwow Series Championships this weekend. We are still dressed in our smoke outfits but we actually won in the Fancy dance category. As much as I love summer I am secretly hoping for it to cool down so I have an excuse to wear my snazzy new jacket. 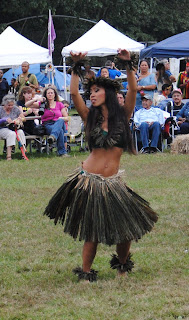 This is Melia, I hope I spelled that right. She did a presentation at each of the four Redhawk powwows. I have to say I was super impressed with her performances. She is really good at what she does. I am also impressed that she is fluent in her Native language. Beauty and skill I love it! 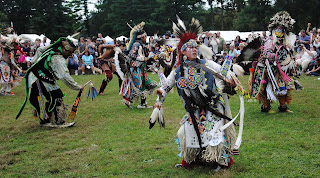 The men's traditional contest was pretty cool. This would be a hard contest to judge if you ask me because there were so many different styles out there to compare.

The men's fancy contest was kind of strange because during the first round they got the slowest song I had heard in a while. Usually men's fancy gets really super fast songs.

We took Challis with us to the powwow and I felt pretty bad for her because she danced so good but her hairties fell out and that got her disqualified from the first round of contest. She must have placed high in the finals because she still placed. 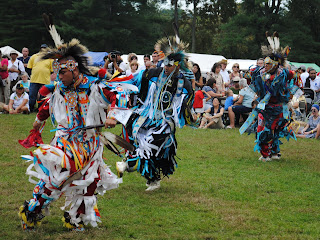 The men's grass category was really exciting. They got some really jamming fast songs. I enjoyed it a lot.

I often talk about the little things that are good or bad about a powwow and at this powwow the grounds were really nice to dance on. They were the best of all the Redhawk powwows.

I love Samatha's beadwork. I think she did a great job. I think it's really cool that she made her husband's beadwork to match hers. 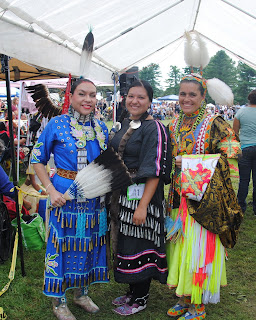 Sunday turned out to be a beautiful day, almost as beautiful as their smiles.

I was happy that Josephine allowed me to take her picture. I think the Eastern Blanket Dance is very beautiful. I tried it once, it's a lot harder than it looks. 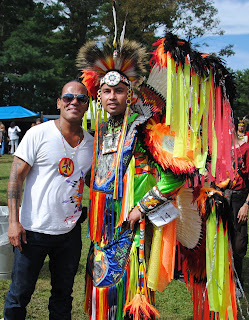 Cliff (pictured here with Derek) did the hoop dance on Saturday. He wouldn't allow anyone to video tape it so I can't share it with you. This is one very talented fellow. At one of the other powwows he did the polynesian fire dance. 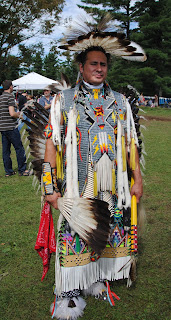 Charles was the Overall Series Champion as he accumulated the most points over all four powwows this summer. He also took second place in the Men's memorial traditional special on Sunday. 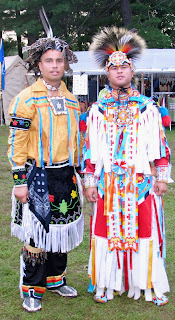 Josh is the Men's grass winner this weekend. Josh told Derek that when they became facebook friends people were asking if they were brothers. Now that you mention it, they do look a lot alike.
It was a great weekend and I am sorry to see the summer end. I look forward to next year and I hear the series is going to be longer. We look forward to seeing you at a powwow or in your school.