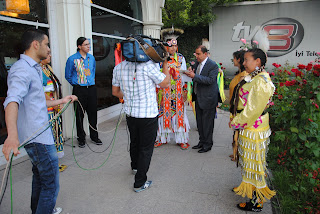 This is Our appearance on a morning show for TV 8. We weren't expecting to be doing that when we went there so that was a cool surprise. We did this very early Friday morning on actual Canada Day. 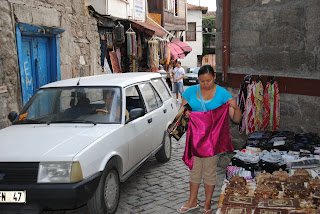 I think everyone we met was pretty surprised at how excited we were to go fabric shopping. The guys were just as excited to see the deals we were able to get. We didn't take into account the way people drive in Ankara though. As your shopping you have to keep one eye on the road because it is pretty busy and when 2 cars try to pass one another, someone has to move and generally it's the pedestrians. I've even seen patrons at a cafe in Ulus have to get up and move their chairs so that cars could pass. 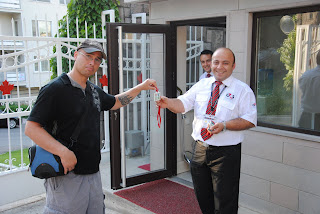 Derek was pretty sad to turn in his "multipass" at the security gate at the Ambassador's residence. Every time we returned to the residence and we showed the passes we all spoke like 'leelu dallas' from the fifth element. You may notice that my pictures are a bit out of order here but I hope you can forgive me. 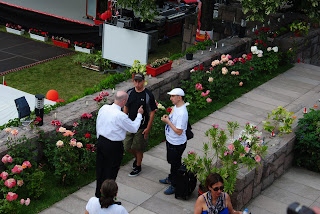 We did a collaborative piece with Mercan Dede at the gala. He is a very busy dude with touring and his plane was late pushing back our rehearsal from 1pm until about 6. We were still able to come up with something cool because he is talented musician and Matt ( he sang for us ) was able to think quickly to come up with a fun and interesting piece. Pictured above is The Ambassador Mr Bailey introducing Derek to Mercan. 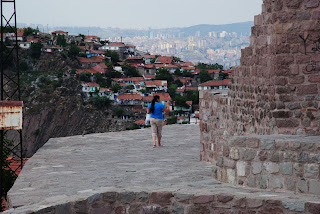 We visited the Citadel in Ulus on our second day in Ankara. I was truly terrified getting there in the cab. I have been quite a few places and had some crazy drivers but this time I was actually scared. The lines painted on the road are just suggestions apparently because there were dividers for 3 lanes, yet we found ourselves in 6 lanes of traffic quite regularly. Most intersections had no signs or lights whatsoever. The system seemed to run on "no eye contact". If you make contact then you have to wait. 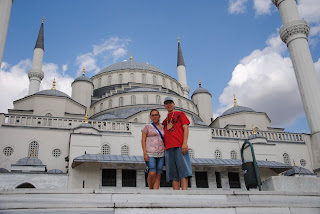 I can't remember now which day we visited the mosque at Kocetepe but it was probably the coolest free thing we have ever visited. Inside was so incredibly beautiful. I have to say I felt really weird being in there while people were praying. That brought up an interesting observation. The people in Ankara are really accommodating and kind. If there was ever a place to not want tourist traipsing through, a mosque would be it. It's not like they were charging admission or even had donation boxes or anything.
2 really interesting things happened to Leela that really sealed that for me. One, she tripped and fell and people came running to help her. literally running to help. Also, she forgot a shopping bag in a store and when we happened to walk past that shop 2 days later, the owner came out and gave it to her. How awesome is that? 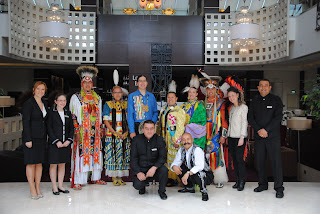 We stayed at the Hilton in Ankara and to thank them for all their hospitality we left our outfits on and took some pictures for their newsletter. I truly enjoyed my stay in their facility and the breakfast buffet in the morning was excellent. 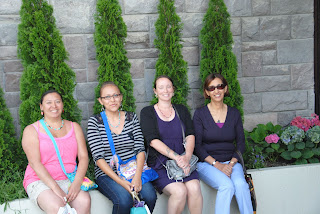 On our last day, Raja Bailey took the girls on a shopping trip and had a necklace made for each of us. She took us to a bead shop and let us pick out the stones and beads we wanted and the artist/owner made us necklaces. How thoughtful was that? 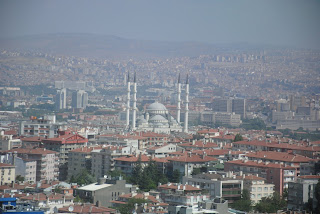 This was the view from one of the windows of our room at the Hilton. You can clearly see the Kocetepe mosque as well as the Ataturk Mausoleum. There were fireworks almost every night somewhere in the city and the calls to prayer were beautiful. I think we will all miss that sound. The city was very modern and fancy so those songs (are they songs? thats how I think of them) were what really brought home the fact that we really were half way around the world. 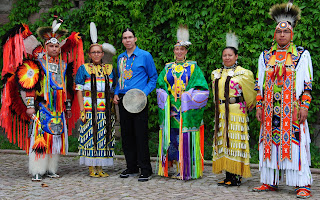 Because we have never danced together as a group before this trip, we didn't have any pictures together. We had 3 or 4 newspaper interviews lined up so we decided we had better dress out and take some pictures so that we were ready. Pictured above from left to right is Derek, Challis Isaac, Matt Isaac, Me, Lisa Marie Lavallee, Jesse Osawamick. 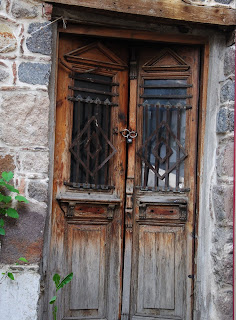 I don't remember where this door was but it was pretty. 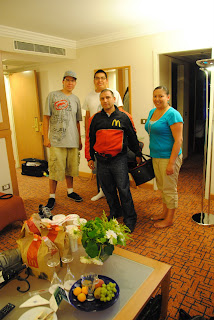 The Bailey's were so kind to us and fed us constantly but we just had to order McDonald's delivery. I mean come on, isn't that on everyone's bucket list. lol. 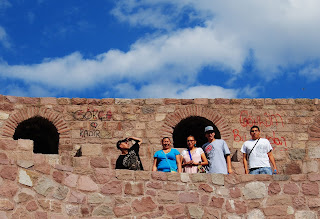 The first touristy thing we did was the Ankara Castle. It was truly like stepping into a whole new world. 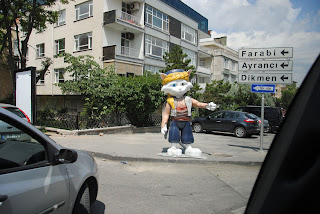 The mascot of the city is this cat. I really don't know much about it other than they have 2 different coloured eyes and that they actually like to swim. These statues are everywhere! 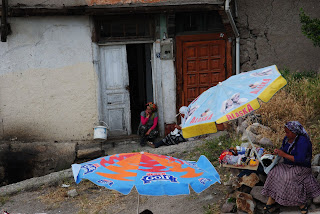 While we were walking around in the castle Derek noticed these ladies minding their souvenir stands. You know how people say it's a small world? Well I wonder what we have in common. 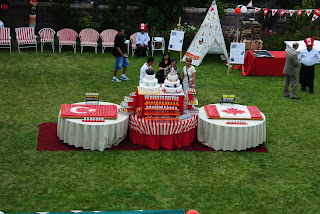 The Bailey's, embassy staff, residence staff and numerous others put so much effort into the gala on Friday night. The cakes and cupcakes were so cute. I think all of us really enjoyed the party. We talked with so many interesting people from all over the world. 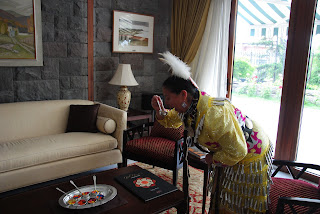 We all just loved that the main living room at the residence always had full candy dishes. Well that is until we got there. 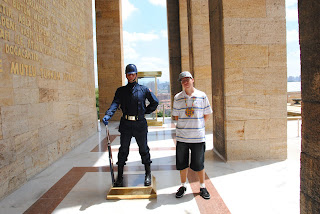 On the final day The Ambassador took the guys to the Ataturk Mausoleum. The guys got so much historical information that day. They keep saying "did you know..." then something about Ataturk. And of course us girls have to say "no, I didn't know that". 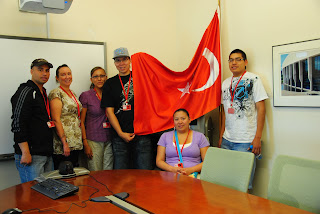 On the first full day we visited the Canadian Embassy. It was very nice and it was even nicer to finally meet people who I had only previously emailed. At the gala Challis and I got to meet the wife of the US Ambassador. I wanted to spend more time talking with her but people kept wanting pictures and she had to leave. boo. 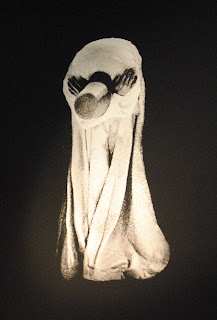 We visited the Museum of civilization which was pretty cool. Looking at pottery and arrowheads made us feel like we could be in a museum anywhere in North America instead of Asia. So many similarities to our own history.
I found it really interesting that interspersed with the historical items were modern art pieces.
All in all i feel so blessed to have been given the opportunity to share my culture with people who may not have ever seen our dances or heard our songs.