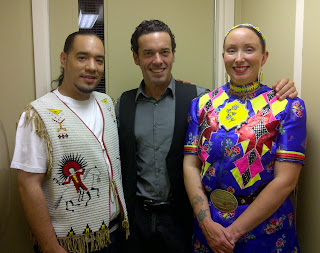 Phew today was very hectic. We were at the Woodland Cultural Centre in Brantford for two performances which almost merged into 1. The first was supposed to be for a group of school kids but the audience for the second which was a "headress ceremony" arrived early and sat in on that as well. Soooo we couldn't repeat the dances which had us flying by the seat of our pants, making up our set list on the fly. All in all I was quite pleased with our morning.
We then had to go to North Park Colliegate for what I thought was going to be a quick dance instruction where we showed some students a bit about Iroquois social dancing. Well that wasn't exactly what they had in mind and it again became a "show on the fly". As exhilarating as it is to go into the unknown, it is also stressful so I was very happy with how things turned out.
Adrian and I then proceeded on to Orangeville ON where we did a hoop dance to open up an evening with the Author Joseph Boyden. I am a big fan of his books so I was thrilled to be able to do this. Mind you, I got some serious butterflies when the organizers ushered him out into the audience to see us perform. I think I held it together pretty good.
We have one more day of shows before we head overseas on Monday. I am very excited to be heading to Turkey as I have never been before. Does anyone know of anything in particular we should really see? What's the "must do" while in Turkey?