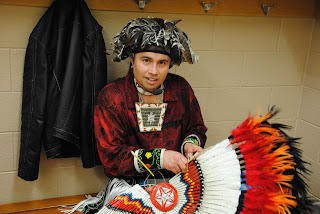 When we first bought the head set microphones the guys would play "backstreet boys" during sound check. Don't tell them I told you. That's their little secret. I don't use those microphones very often and that's a good thing because my huge earrings often rub on the headset and make a very annoying noise. 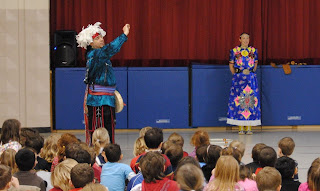 I woke up this morning to the awful news of the earthquake and tsunami in Japan. In this age of internet and television when things like this happen on the other side of the world it makes me feel powerless and like I should be doing something. Well all I could do was try my hardest to generate good energy during my hoop dance and will it over to those suffering. I know that sounds pretty hokey but that's all I have to give. 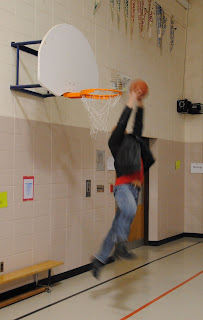 As you can see the guys love playing ball in elementary school gyms. The fantasy of being able to dunk is still alive!
The energy in that gym today was amazing. If I could bottle it, I would put red bull right out of business!
Have a great March Break everyone.