The CAMA's were an interesting experience. We were performing with the Lost Dancers at the Education Day at Copps Coliseum in the afternoon which was fun but wow whirlwind fast. We rushed from our performance across the street to Hamilton Place for the rehearsal for the CAMA's. When we arrived we were asked to put 5 of our adult dancers aside to perform in the closing with Susan Aglukark. Derek ended up doing that while the rest of us did the opening. That was cool and all but that meant staying for the entire show which was a long day for the kids. 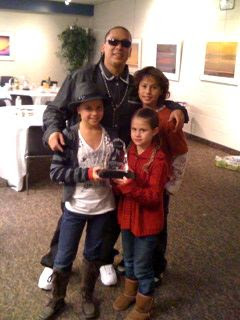 We met the rapper Feenix in the hotel lobby before the awards and were pretty impressed when he let the kids hold his award after the show. I must say that I would hate to be the stage manager at an awards show. sheesh a lot of work.