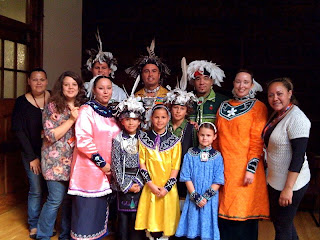 The Opening of ImagineNATIVE went really well. The place was filled to capacity and it was a small space to dance but we made due. Yesterday on our run I sprained my ankle and I was very pleased that it held up today. We had to follow a memorial song so the mood was a bit sombre when we started. By the end, I think everyone was in good spirits. I embarrassed myself a bit though. Adrian was on stage doing the MCing and singing while the rest of us were on the floor. Well after our first dance he invited the guys on stage and I piped right up and was like "no, we're next". I didn't let him finish because he was inviting the guys up onstage to help him sing for the girls. I felt just a wee bit foolish but I shook it off. lol.

After the whole the thing was over we met the star of the film "Lani's Story" as well as some of the filmmakers. They came all the way from Australia for the this event. I truly hope we get a chance to catch that film on Sunday.

Are you going to check out the festival?