I had the best day today at Alexander's Public School. We did a performance and two workshops with the Grade 7 & 8 students. It felt like a monday morning when we started because we haven't done the multimedia show since the end of July and we took a moment to get into the groove but the flow came back and the show went well. 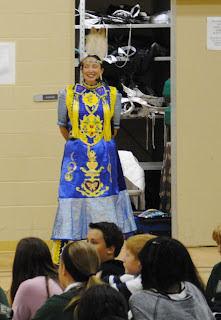 The students all were very enthusiastic about the workshops and that made it a blast for me. In the second workshop we had a sing off. That is a first for us and those girls were fantastic. Wow was I ever impressed. For part of the workshop Adrian teaches about Aboriginal singing and we have the kids learn a very basic song. Well today we had the kids split in two groups and see which group could be more cohesive and loud. Well it was a tie so we had a sing off where each group chose one person to solo. Both groups happened to choose a girl and they were both sooooo good.

At the end of the day a student gave me an origami swan that she had made. What a nice thing to do. 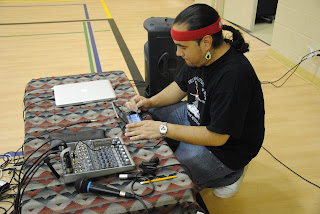 In between workshops Adrian was making beats on his son's DSI. That was pretty cool actually. I hope everyone had a great day!