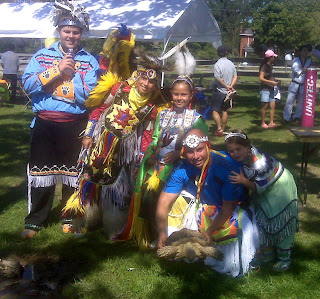 We had a very very busy weekend. K had her soccer finals and they played early saturday morning. They won the game and advanced to Sunday. After that we did a performance at the Milton Diversity Day Festival. This was pretty fun and a beautiful day for it. There was also a Ribfest happening at the park with a stage and performances as well. The stage we danced on was pretty standard however it was pretty slippery with the moccasins so we did about half of the show on the grass in front of it.

Derek and the kids are all turtle clan and it was pretty cool to see a large tortoise just wandering around the festival. We just had to have a picture with it. 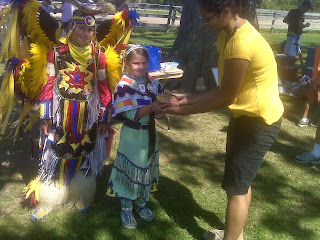 A was pretty brave to hold that critter. Well until it tried to crawl up her arm. lol. School is just around the corner and summer is almost gone. I hope everyone soaks up the sun on this last week of freedom.