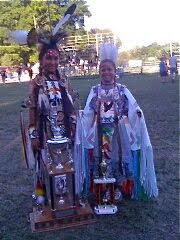 What are your plans for August?
2 comments:

My Feathers are ready to be worn at a moments notice. No I really do take good care of them and put them away when I finish dancing but in this photo we were traveling from one show to another and all we had time to do was take the feathers off so they wouldn't get smooshed in the van and put them back on when we arrived at the next location.

We had a busy Saturday with our final workshop at WCC. Thanks to L for being able to come with me that day so Derek could go to the track meet with the younger kids. 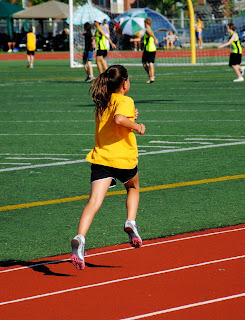 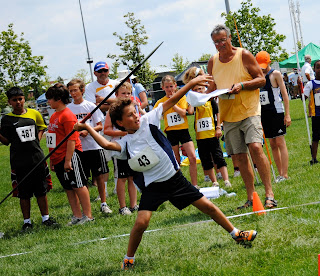 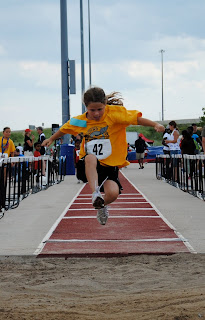 We also had a performance at our first wedding that evening. The wedding party looked beautiful and I wish we had pictures to share with you. We did a two step and had the wedding party danced with us and it was really fun and they all seemed to enjoy it. It was cool for Derek to run into two people he knew from way back. It really is a small world.

We are really looking forward to Grand River Powwow this weekend at Chiefswood Park in Ohsweken ON. Come on out and check it out because it really is a great spectator friendly event. The question now is will I have all of our moccasins fixed or not? Will you be seeing glimpses of Martin toes? lol I sure hope not!
No comments:

pictures from WCC shows and workshops 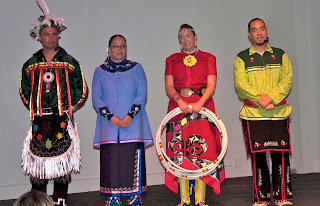 We don't even look tired do we? lol, we should. The crew at the end of a 60 minute show at WCC. We have one more left next Wednesday at 7 pm.

This group of people that came out for the first workshop were of all ages and we had a great time working with them. Come out on Saturday at 10 for our last WCC dance workshop.
No comments: We just finished the 3rd of 4 shows for the Woodland Cultural Centre today. I was happy with the turn out and was glad to see Summer and Kelvin in the audience. The show went well and we are looking forward to our 4th and final show next Wednesday July 21st at 7 pm. We have our final dance workshop at the WCC on Saturday the 17th at 10 am. We hope lots of people turn out for that because it is a lot of fun. I believe you can register the day of if you haven't already.

We are going to be at Thorncliffe Park in Toronto on Friday at 7 pm. If you are in the area come out and see us!
No comments: 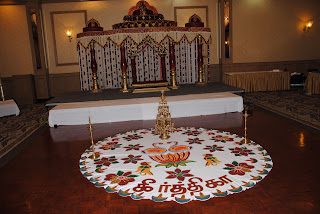 Today we performed at the coming of age ceremony of Markham City Councillor Logan Kanapathi's daughter. We were very honoured to take part in something like this. Wow these people sure know how to have a party. Everyone looked so beautiful. I know it's rude to stare but I just couldn't help myself the clothes were just so incredible. 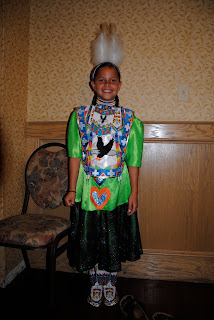 K has all new beadwork. It is so well done I think it will last her a very long time. She looks great in it. She's already outgrowing her new dresses. uh oh, more sewing on the horizon. 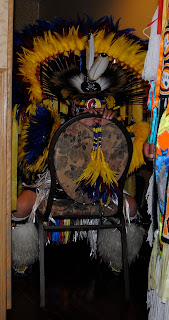 Poor J. His last ounce of patience was tested today. We weren't sure exactly when we were to dance so we had to be dressed and waiting in a tiny little room for about 2 hours. You just can't rush these things but that is hard for an 11 yr old boy to understand. He danced great when he was finally unleashed. lol. We did get in quite a few rounds of charades and he was kicking butt at it.

We have been doing quite a few dance workshops lately and they are so much fun. The framework we follow is similar each time but we have never had two workshops turn out the same. We did our first of two for the Woodland Cultural Centre on Saturday morning and it was a blast. We also did our second of four performances at the Centre on Wednesday. The Tim Horton's camp at Onondaga Farms came out to watch and were they ever a great audience. The bus they travel in is pretty fancy schmancy I must say.

We were also at the launch of the city of Markham's Diversity Plan. That was fun. We met a group of Lion dancers as well as a flamenco dancer. I was bummed because I forgot my camera at home that day. Many many Nia:wens to Kim, Katelyn, Maddie and AJ for coming along and dancing with us that day. You girls are fantastic dancers.

Come and see us at the Woodland Centre on the next two Wednesdays for performances or on Saturday for a dance workshop.
No comments: 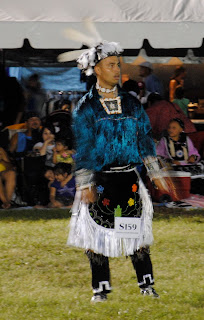 There's Derek with his game face on. Ready to contest. He took 4th there and I was very proud of him. Looking at this picture I can see so many more bits of beadwork that I want to add to his outfit. 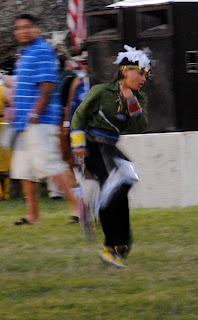 J was jamming so hard in the smoke contest. I was happy that you could enter both smoke and the regular contest categories. This boy seriously needs an upgrade on his outfit. When I made this he wasn't all that interested in dancing smoke but now he wants to get out there all the time. He cracks me up because he is not at all afraid to try new things and just have a blast when he dances. 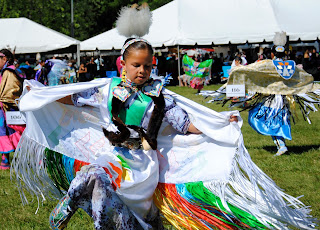 K did a great job in her contest. I showed her how to get around dancers that were slower. On saturday she was next to a girl who was close to a foot taller than her and she just couldn't get past her. Sunday's contest went so much better. She ended up taking 4th in fancy and 2nd in smoke. 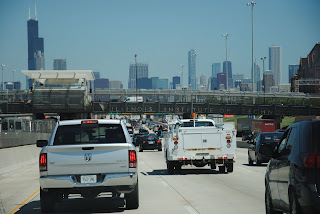 As cool as it was to drive through Chicago and see the sights I hope I don't ever have to do that again. lol. The traffic there is just awful. 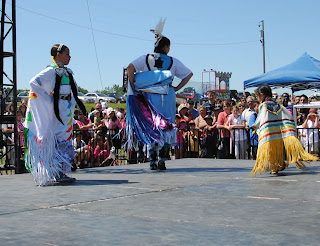 We had a great Canada Day. We performed at the Dundas Pancake Breakfast at 10 am and mmmmm were those some good pancakes. The audience was very receptive to getting in there and dancing with us when we had participation dances. That just makes everything so much more enjoyable for us when we know people are having a good time. After that we had to stay dressed in our dance clothes and head off to Downsview park for three more shows. 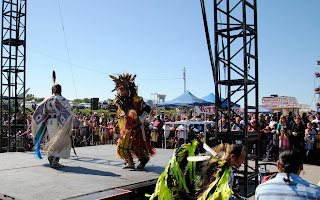 All of the pictures are actually from the Downsview park shows. Things were a bit confusing when we arrived but in the end it all worked out. We were given a map with a space that had "Tribal Vision" marked on it but it was actually just a patch of grass where the organizers wanted us to be. Well it was such a warm day that people kind of took over that patch of grass because it was cooler there. So we ended up performing on the stage area set up for the aerial circus performers. 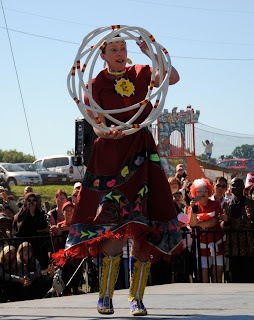 I am not sure if you can tell from these pictures or not but there is a fence surrounding the stage so audience participation was out of the question and we did kind of feel a bit like zoo animals.

They had an empty warehouse for us to use as a change/green room. That was perfect for the kids because they could run around all they wanted in between performances. I couldn't believe the amount of people that were at this event. The kids all wanted to go on the rides but the lines were just too long. 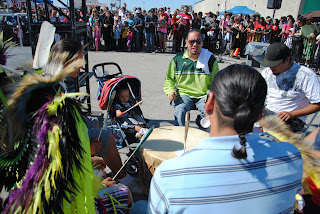 Yes, this is how we teach the kids to sing and dance. There are no singing lessons or dance schools for us. The children learn by doing. It is rare in our culture for us not to bring the kids along to whatever we are doing. They are important members of our society and it would be very strange to not have them involved. 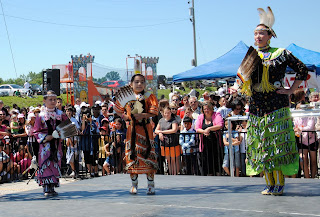 I had just recieved my fan back from a fan maker located in Windsor ON. I think he did such a fantastic job on the thread work. I was a bit nervous using it at Downsview because it was so windy that I was scared I would break a feather. 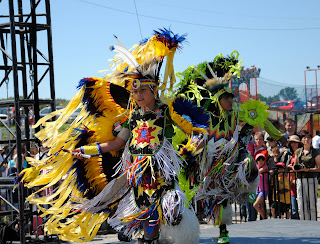 The boys really did their thing when it was time for the fancy dancers to get out there. These two are great dancers and I just love to watch them dance.
No comments: