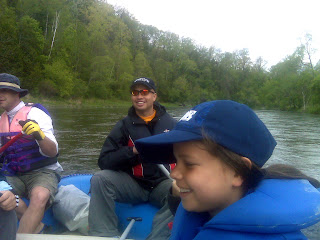 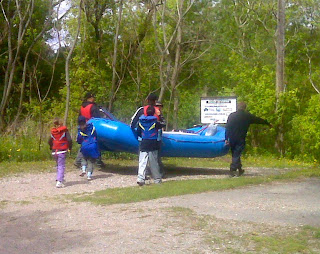 We went out with Grand River Rafting on Saturday and it was so much fun! The time just flew by and we went quite a bit farther than I had expected. It was a great day to be on the river. We had joined another group that were celebrating a birthday so we met some new people. Our guide Dale jumped out of the raft to get us some fresh spring water. We took a short hike to check out the plants and trees around the river. We were able to see a 300 yr old hollowed out tree that was still living. A few of the people were able to climb up the inside of the tree. Poor A, her legs are just too short yet to do it. She was disappointed because she wants to be able to do everything her big sister does.

We made a stop to play a game where we were divided into 2 teams and we had to build a fire, cook and eat an egg. The first team to complete the task wins. Well the men's team won which sucked because we tried pretty hard. K kept asking me "can't you tell them how to do it?" but I was too busy giggling because the ladies on our team were already lighting the matches before we even had any wood collected. Dang, I barely had any rocks gathered to make a fire pit and they had almost used up the matches on the grass. lol. When they did finally slow down we did get a fire going but the boys egg cooked first.

On Sunday we performed at the Honouring Mother Earth Festival at the Niagara Native Centre near St. Catherine's. We did 2 short presentations that went pretty well. The weather was great and it turned out to be a traditional powwow as well. We didn't bring our outfits though so we didn't dance in the powwow other than a few intertribals. It was good to visit with some friends that were there to dance. The kids did great and for the 2nd presentation we were able to get quite a few people from the audience to come and participate in the dances with us. I really like it when people dance with us, it's a lot of fun.

So now we are off to Long and Mcquade tonight to purchase a sound system. We have been renting so far but we feel now is the time to buy. I hope I don't get a headache from all the techie speak. lol.