We did a really fun dance show and workshop at Bellview School on Friday. The kids were so much fun to work with. They were energetic and creative. We only had an hour to work with them on the workshop so we tried to cram as much into that 60 minutes as we could. The show portion was webcast to Major Ballachy school. I had never been a part of anything like that before. Adrian really got into it having the students from both schools interacting with each other and with us. I really enjoyed that. We went a little over time however and the students at the other school were not able to see the end. And no, we didn't do that on purpose to get them to hire us to come there. lol.

On Saturday we attended the Smoke Dance Contest at the Woodland Cultural Centre. We have been at this function for the past 3 years and even though it is over very quickly we always have a good time. The weather this year was not exactly cooperating so the event was moved indoors which was fine however the stage made a lot of noise with people dancing on it. I was so proud of everyone, they danced so well and k placed first in her division. I am kicking myself that I still haven't bought a good camera because that would have been a great day to get some pictures. 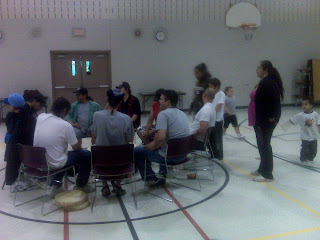